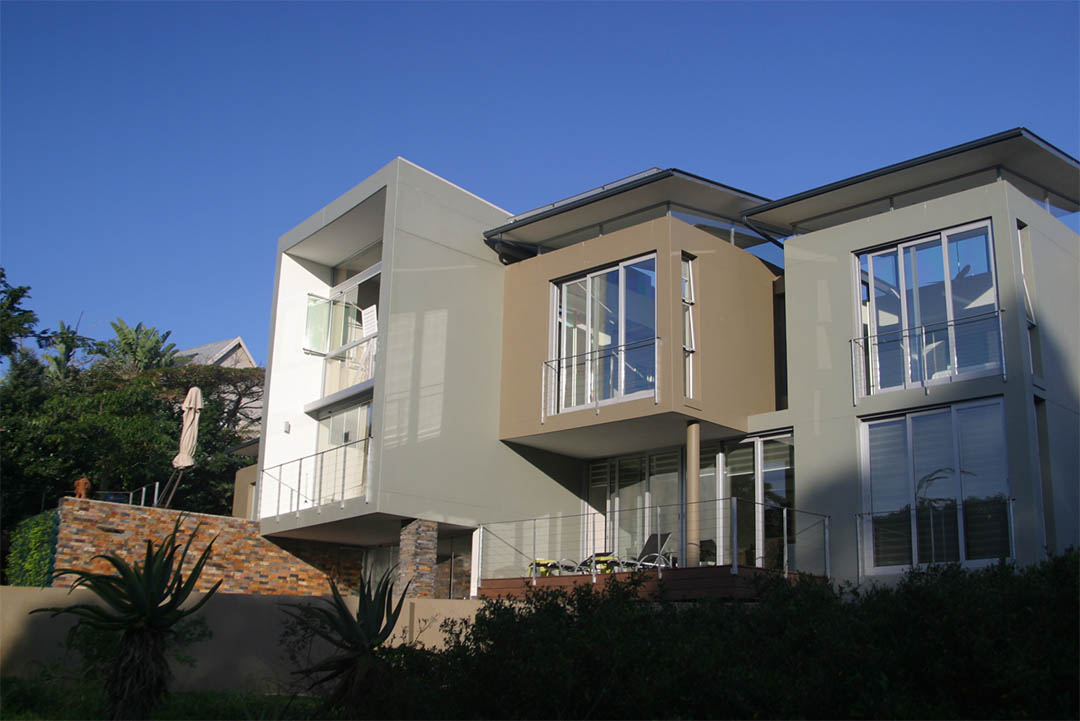 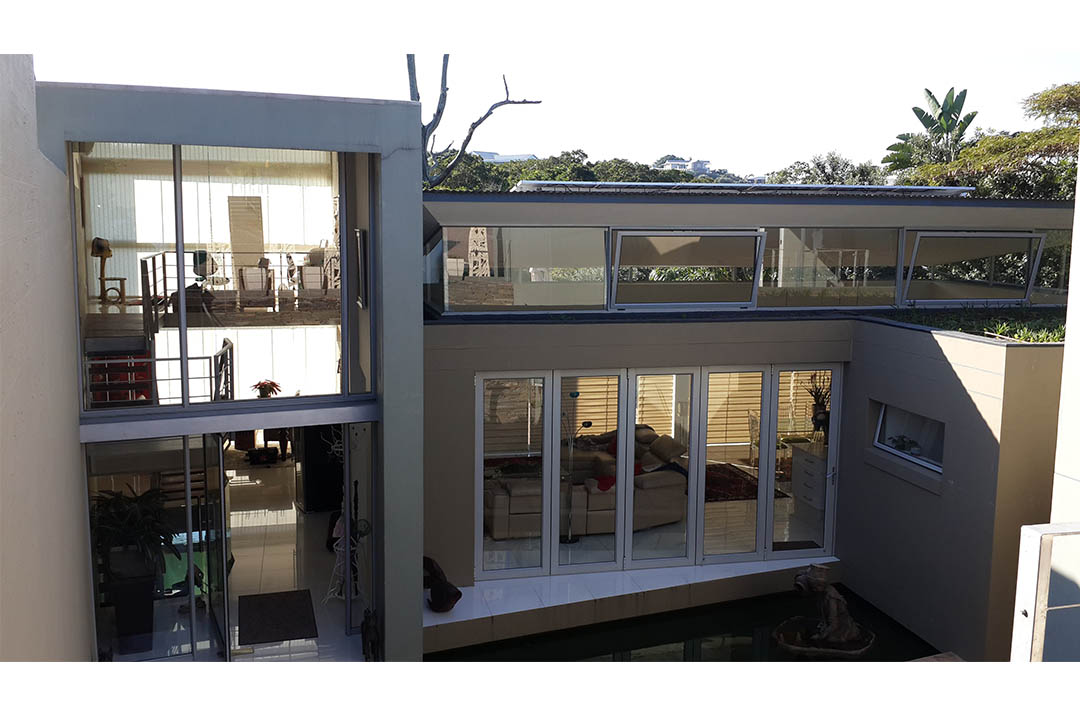 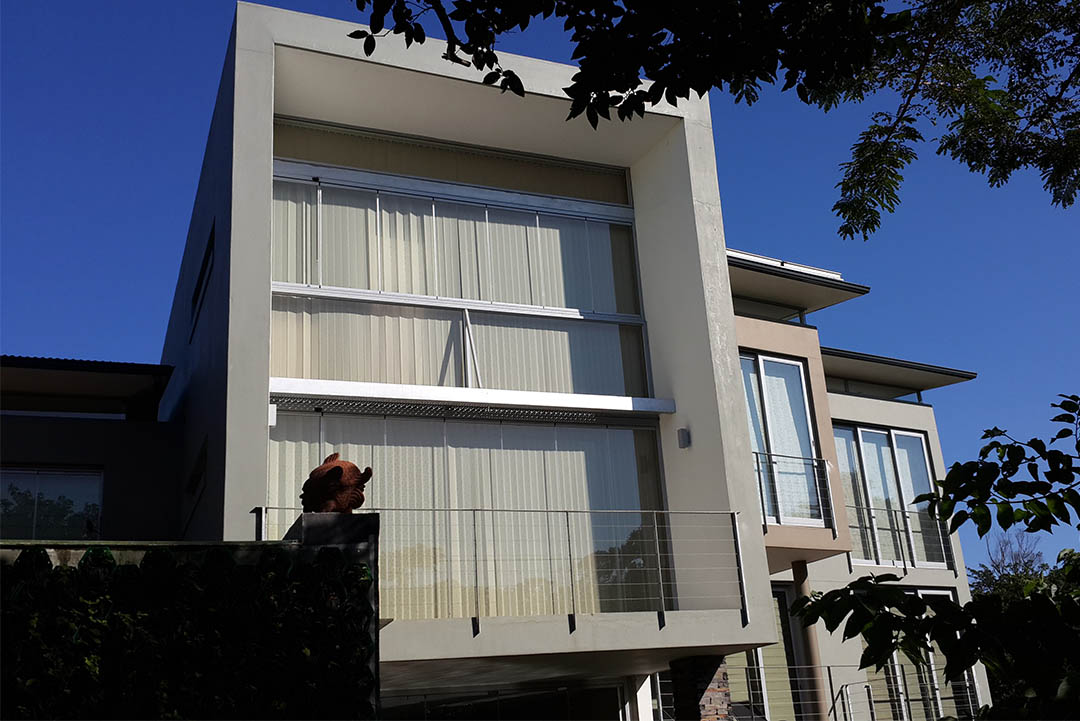 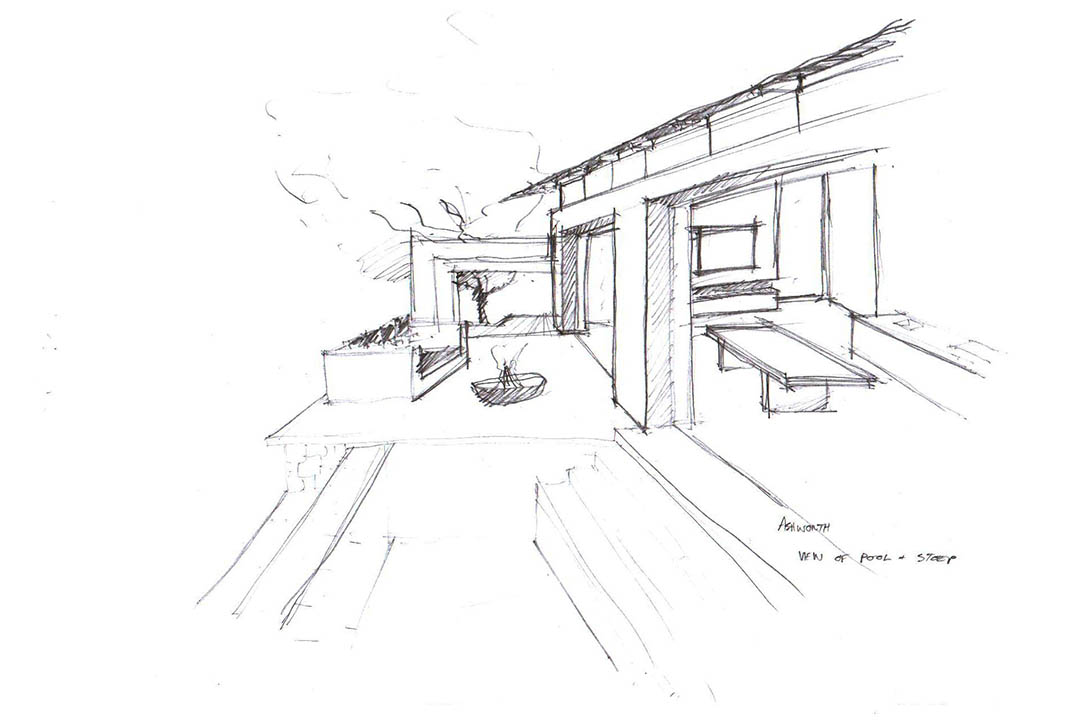 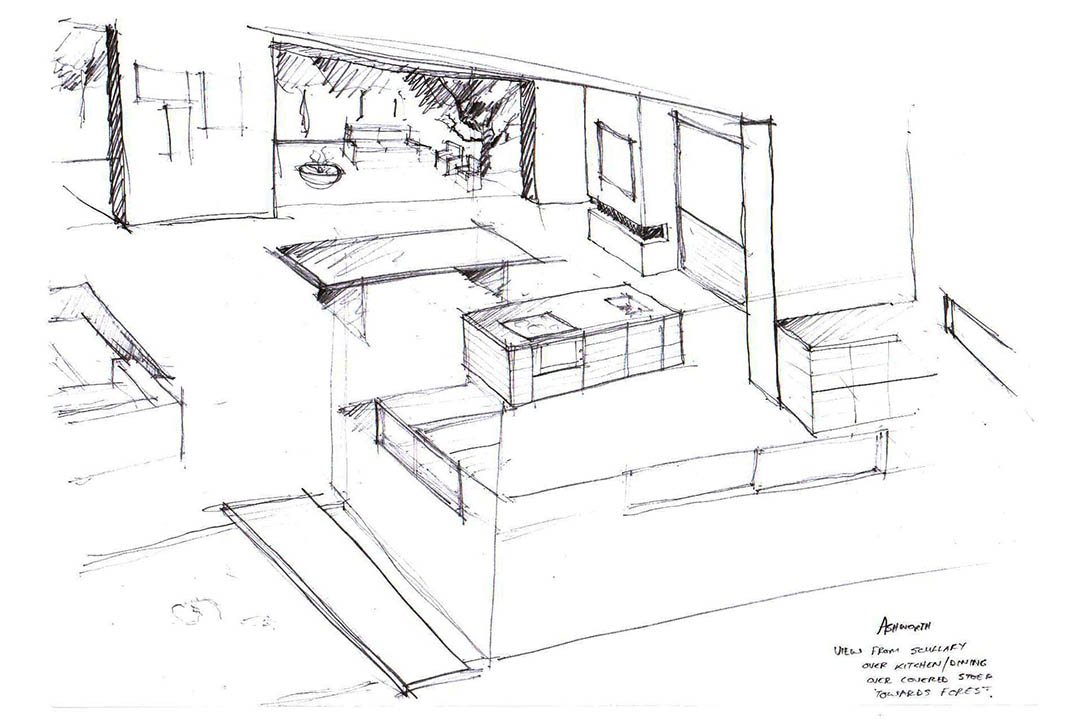 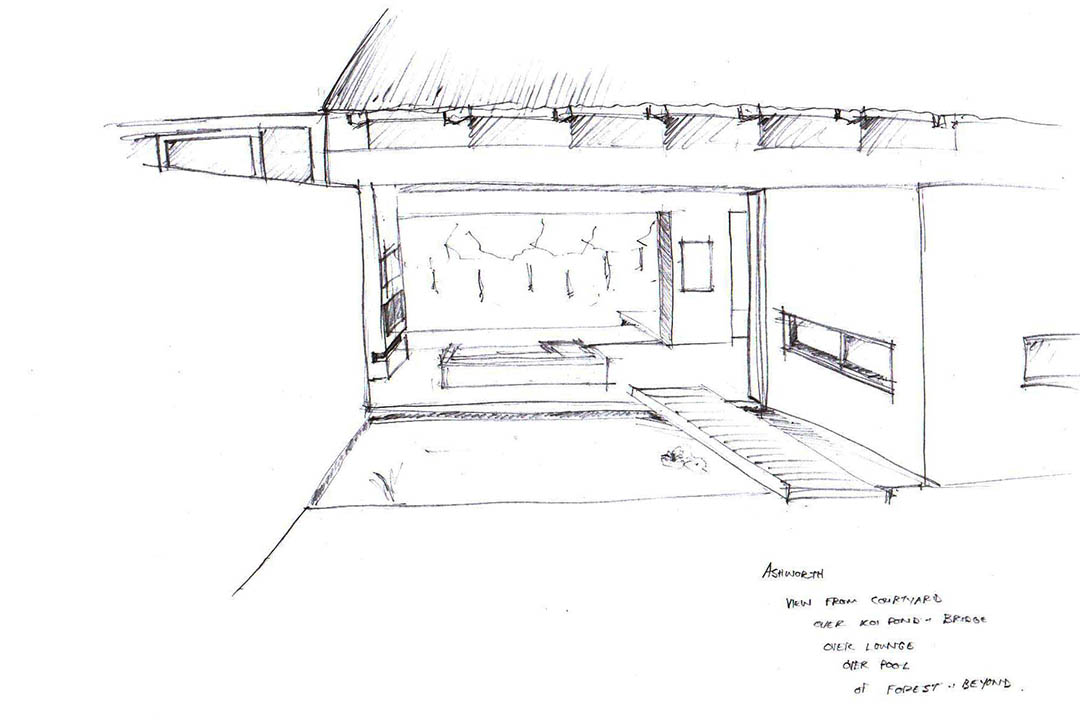 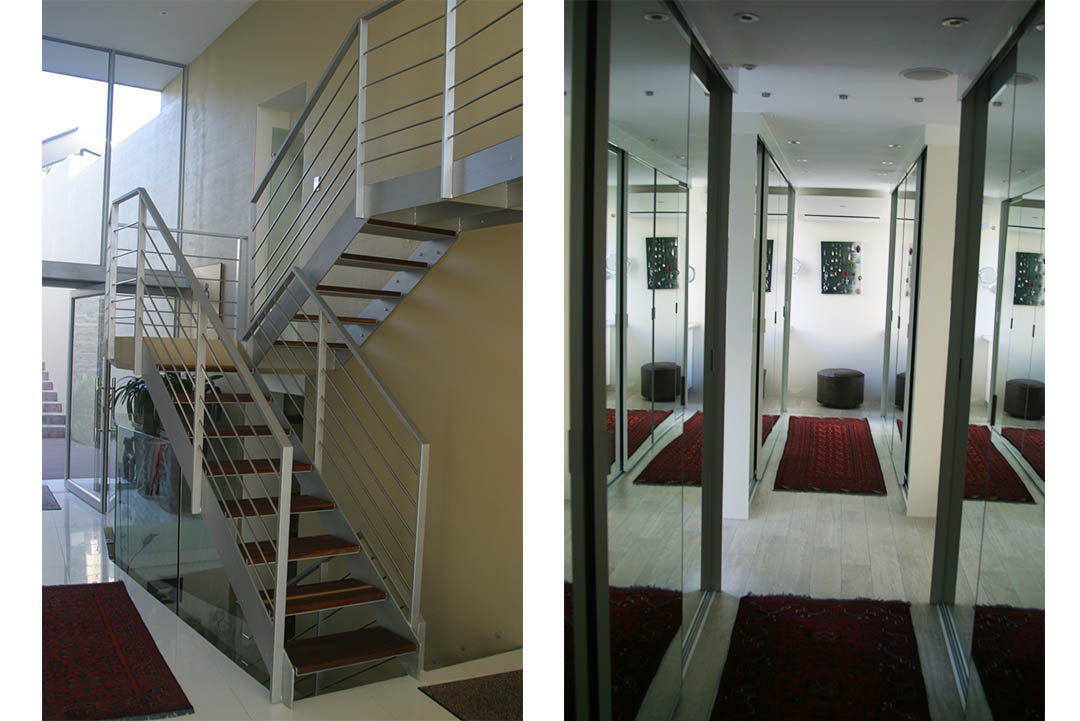 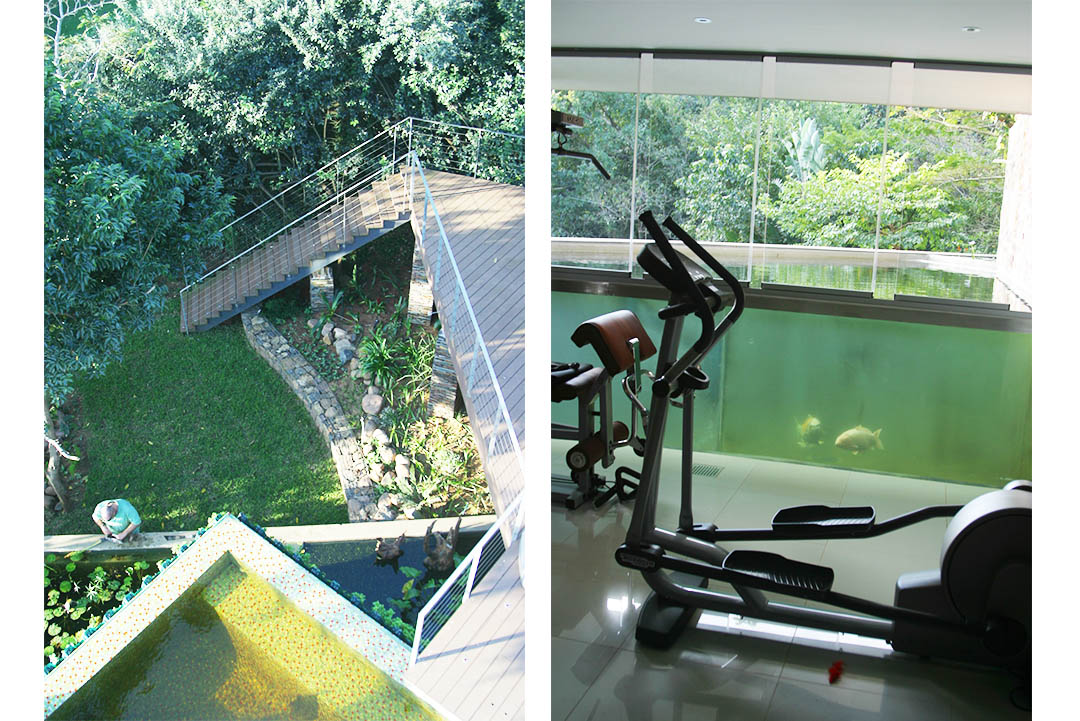 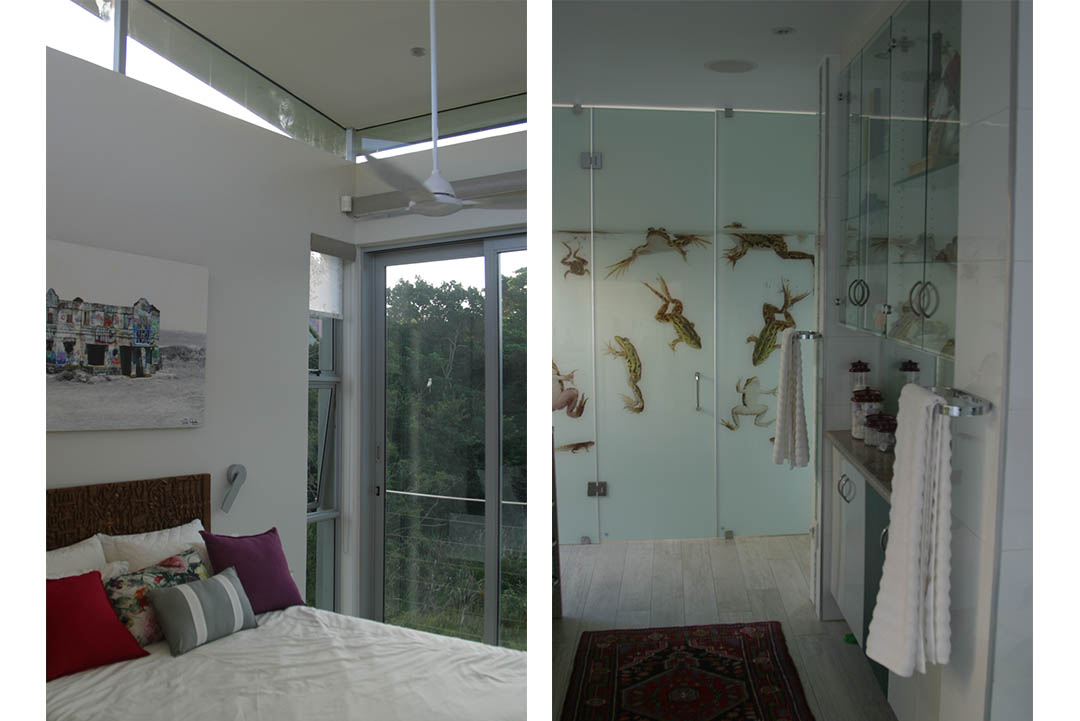 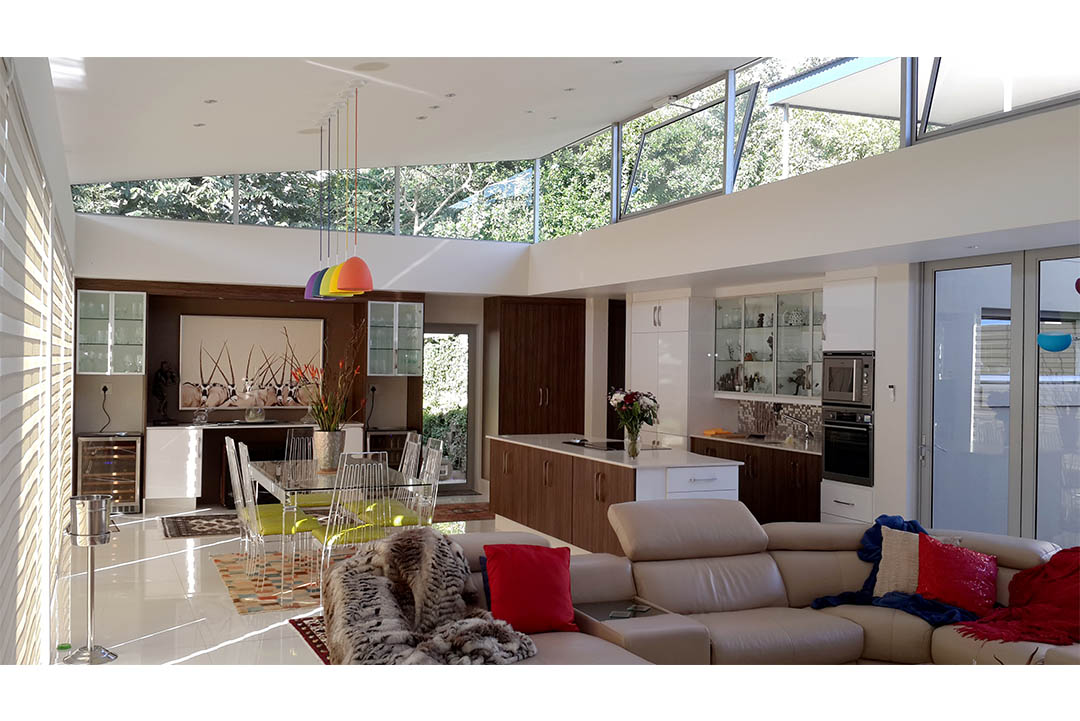 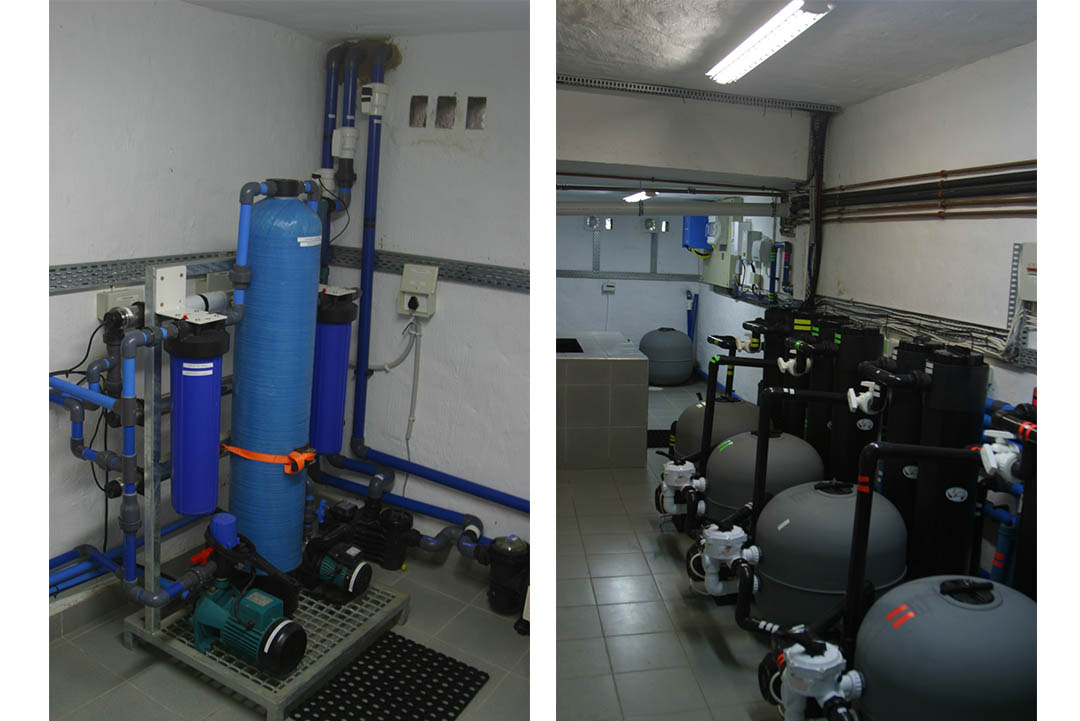 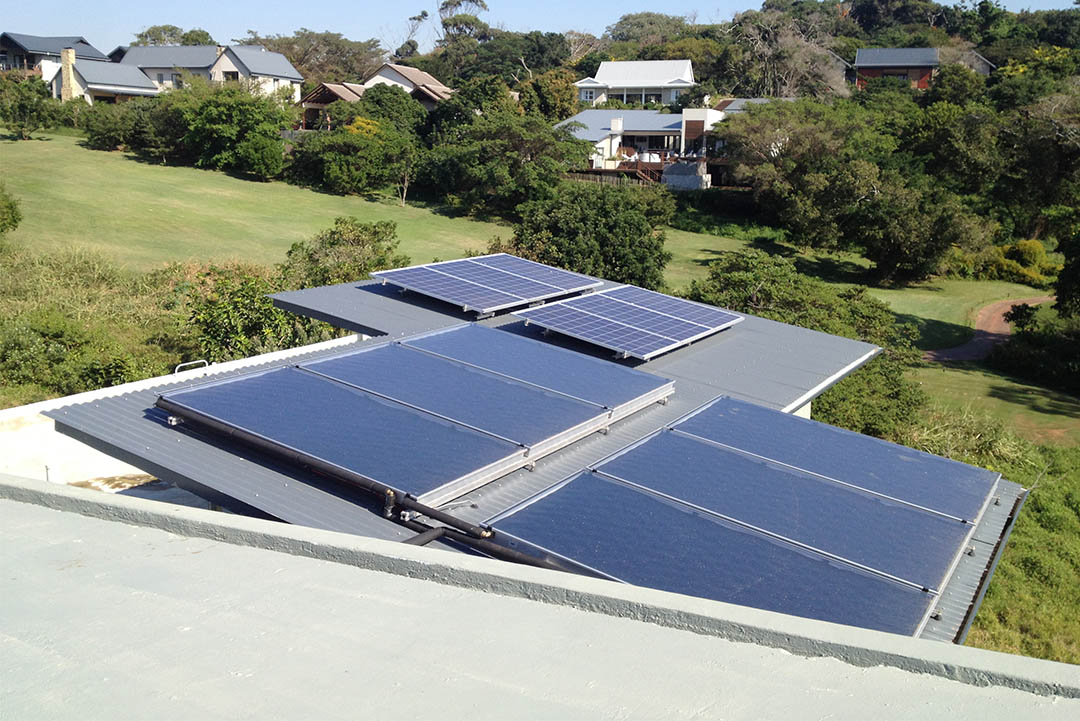 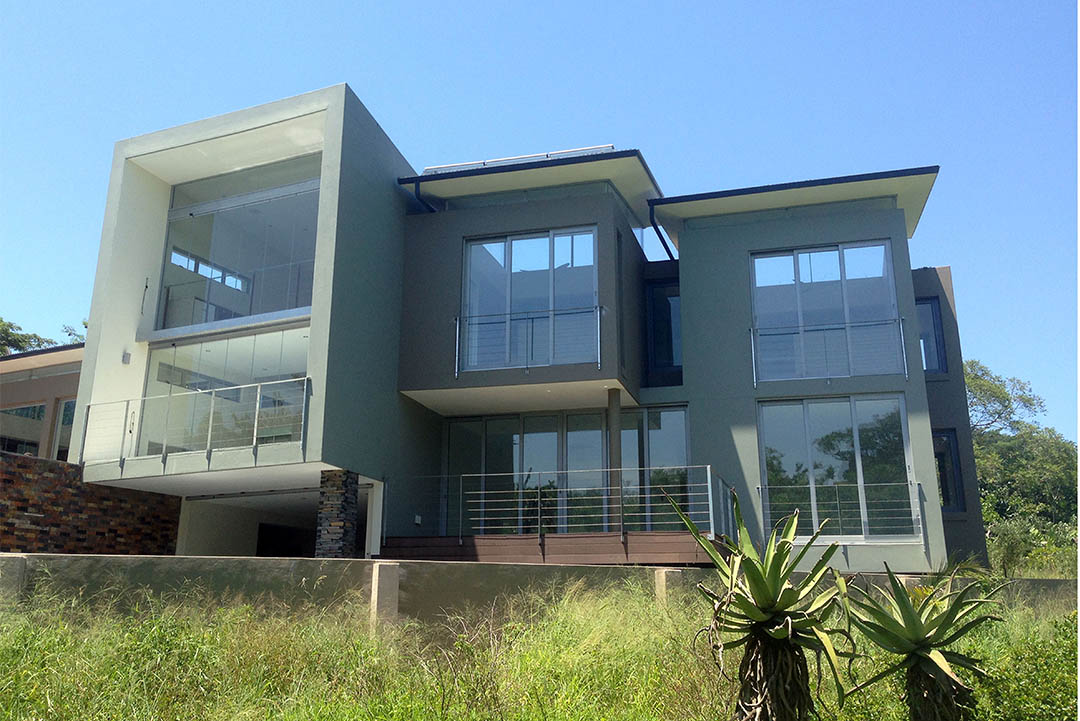 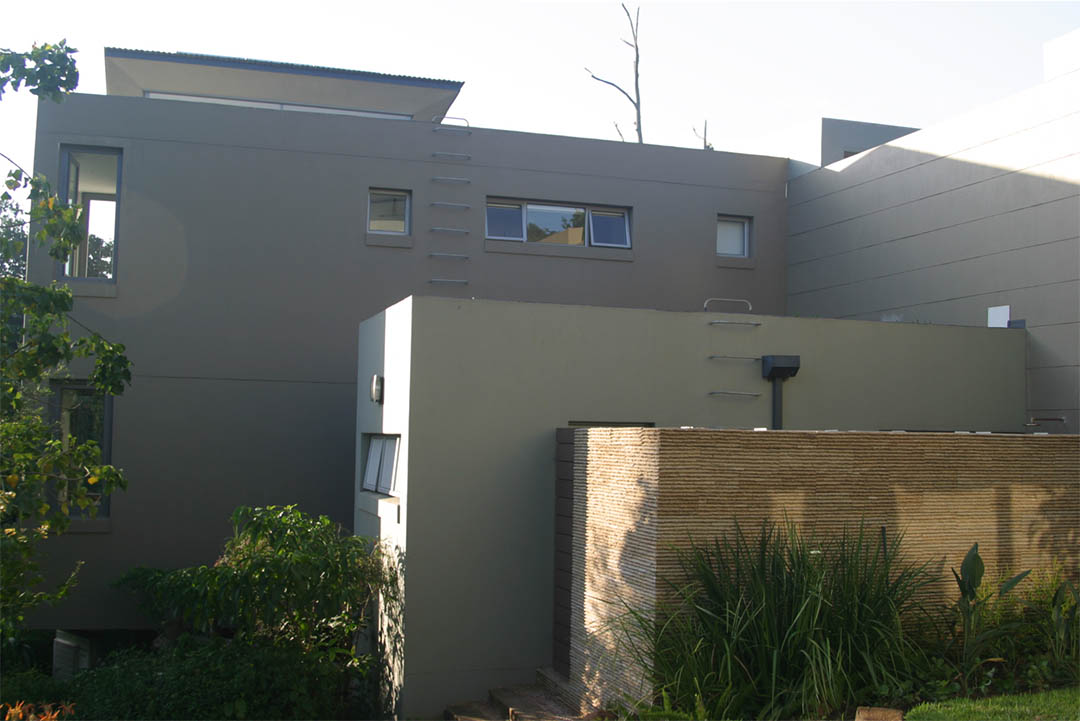 The clients wanted a holiday home at the coast which they and their 60 Koi fish could move to when they retire. Animals, and the protection of the earth’s natural resources, was second on their list of ‘must-haves’.

Strey Architects was presented with low lying stand at the end of a Cul-de-Sac, with views of an indigenous forest & a natural marshland. Because there was a sharp drop away from the street, and most of the stand would have been taken up by a driveway ramp, it was decided to create an ‘upside-down’ house on various levels, which looks like it sits on a lake for the Kois, typical of Sub-tropical architecture.

The swimming pool water is cleaned by overflowing through a wall of plants and through a small wetland into the Koi pond. PV panels charge two electrical systems, one for the house and one to make sure the Koi pond water never stops circulating. The tour de force is a glass wall in the office/gym, with views below water of the Koi ‘pets’, which comes when they are called, and a view over the water towards the marshland & indigenous forest.

A holiday home, which will later serve as a retirement home, was required by a middle-aged, affluent couple. They required an ‘off-the-grid’ home for them & their 60 pet Koi fish, making the most of the indigenous forest. A separate main suite close to the Koi & living area flowing out onto a deck & infinity pool, two separate guest suites for visits from their adult children’s families, as well as double staff quarters, was the very specific brief given to us.

We were faced with a stand which featured a steep drop-off at the bottom of a cul-de-sac, and a view of the forest towards the North-West. We opted for an ‘upside-down’ layout, in order to have the garages at street level with minimal paving, which will also act as ‘barrier’ between the street & house.

The main suite & private deck, hovers just above the Koi pond water level where the owners can interact & feed them, while enjoying the views towards the forest. The guest ‘wing’ was placed above the main bedroom suite, while the living area was positioned on a spilt level between the two bedroom levels.

A full ceiling height area under the living area was achieved because of the spilt level arrangement, accommodating all the services including the batteries & invertors for two photo-voltaic systems, (one for the household & one for the Koi pond system which needs to be active all the time), a 1000l solar water heating system, 60,000l rainwater tank under the swimming pool and various water filter systems. Mono-pitched roofs are jam-packed with PV & water heating panels, while flat roofs are plated with indigenous succulents, which provides greenery on the ‘fifth façade’, as well as insulation.

Although the client asked for an AC system to be installed during the building process, it was never needed to be switched on. We feel that we have succeeded in creating a single deep space, pavilion type home ideal for a sub-tropical climate, without being stylistic….

The build on Erf 592, Simbithi Eco Estate was not only a complicated one in regards the lie of the land, but also the technology spec given to the Architect was probably 5 years ahead of its time.

This home is supposed to be off grid but for the time being a hybrid version of this is being achieved.

As owners we are revelling in the fact that (for the time being) the numerous Eskom power cuts do not affect our lifestyle or the quality of life for our immense Koi pond which is the feature of the house as the house has two large capacity solar power systems, one for the house & one for the Koi pond.

We are also extremely lucky that there was foresight to install a large reservoir to collect all rain water and use this precious commodity to regularly top up our swimming pool and koi pond.

The swimming pool is also a radical feature as it uses no chemicals whatsoever and is totally natural.