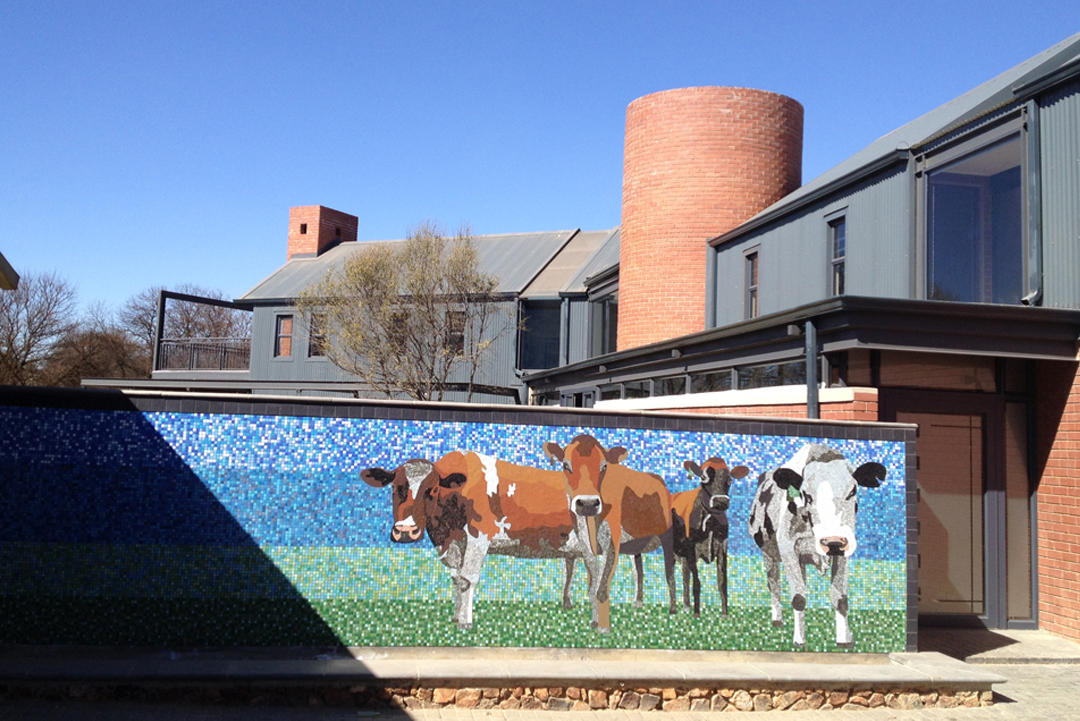 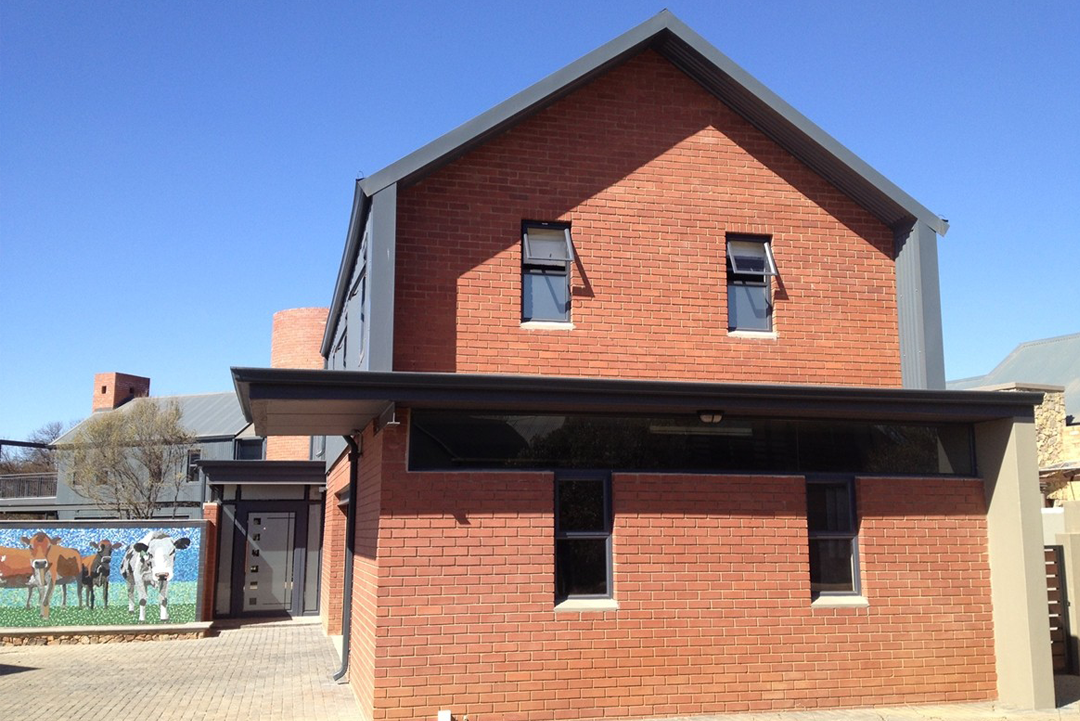 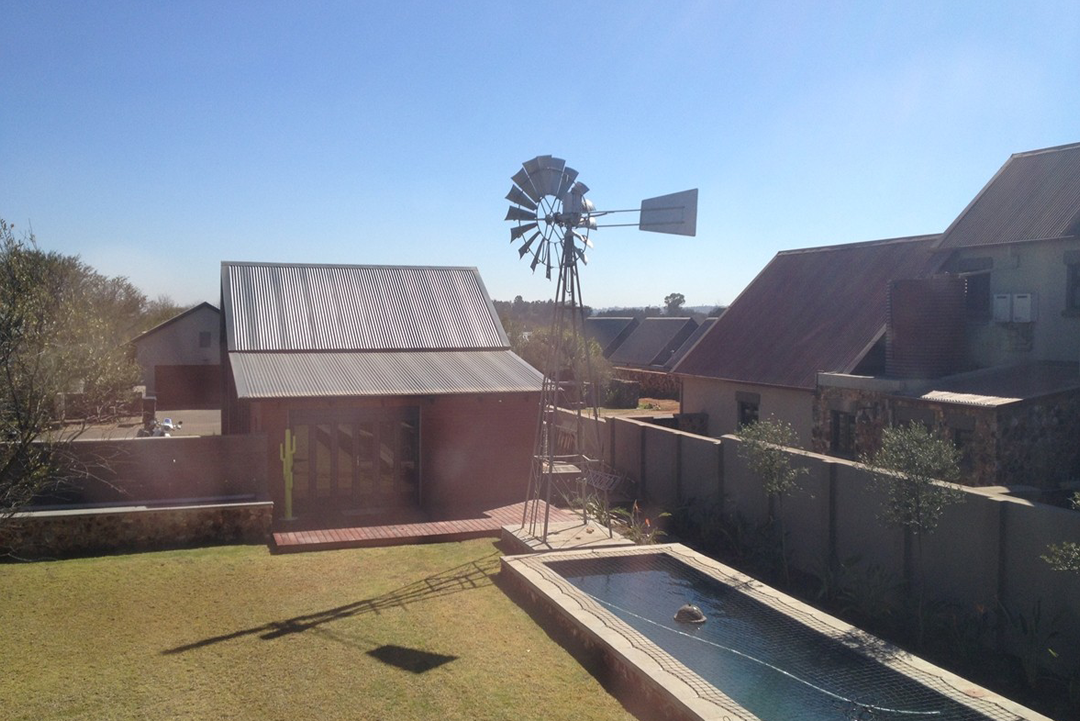 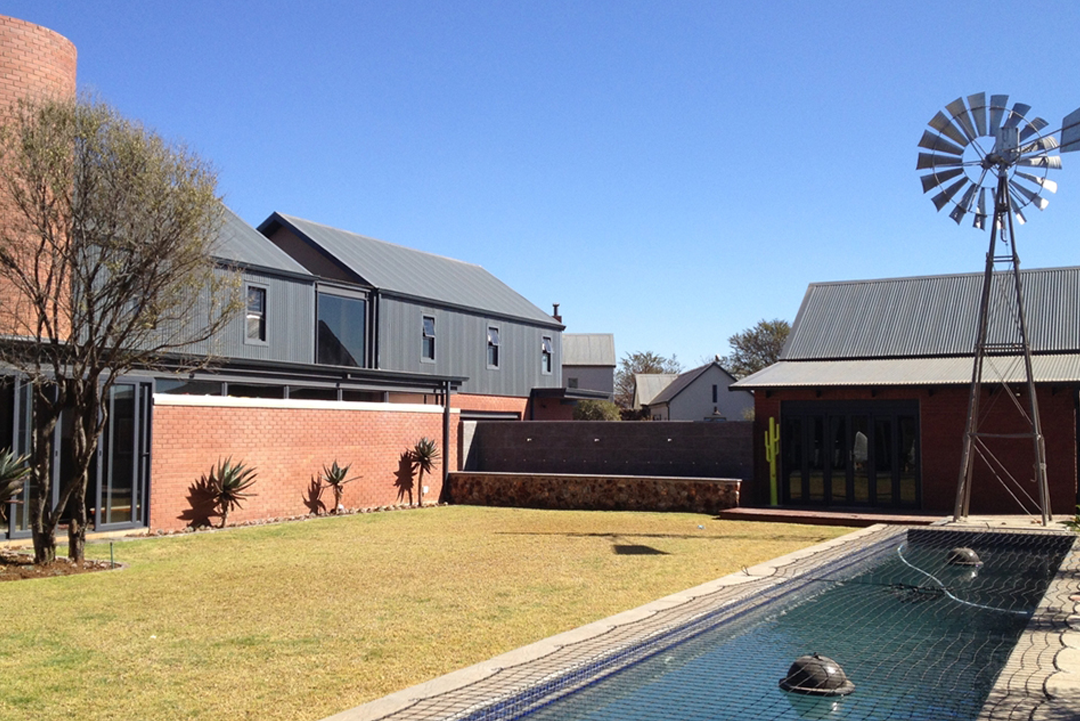 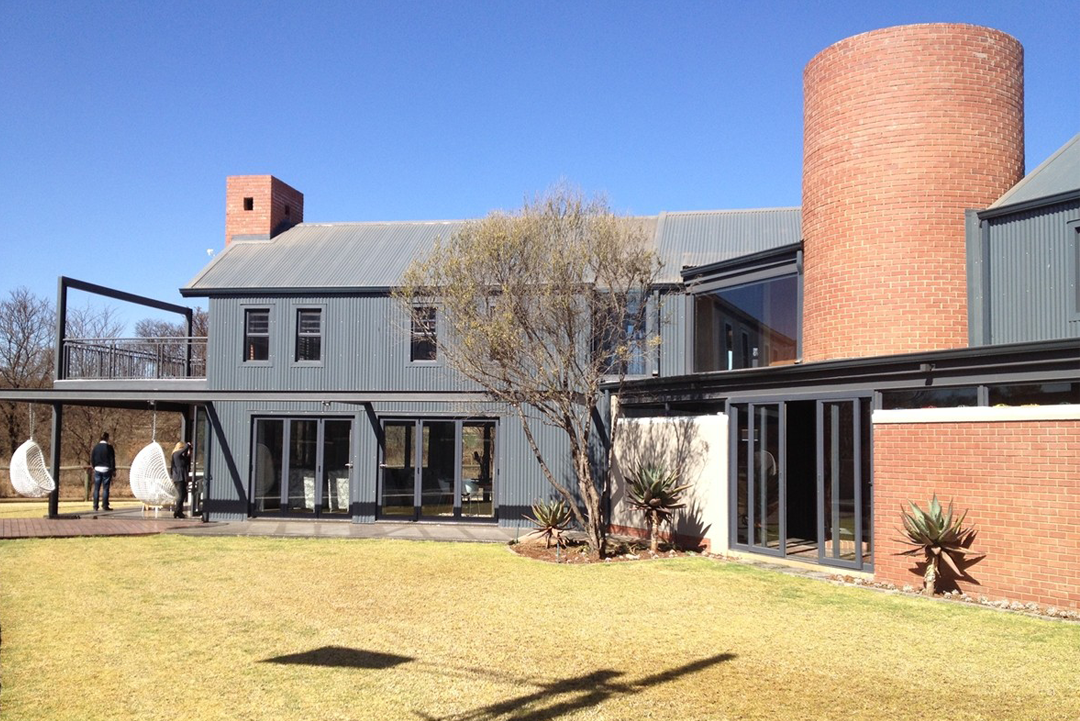 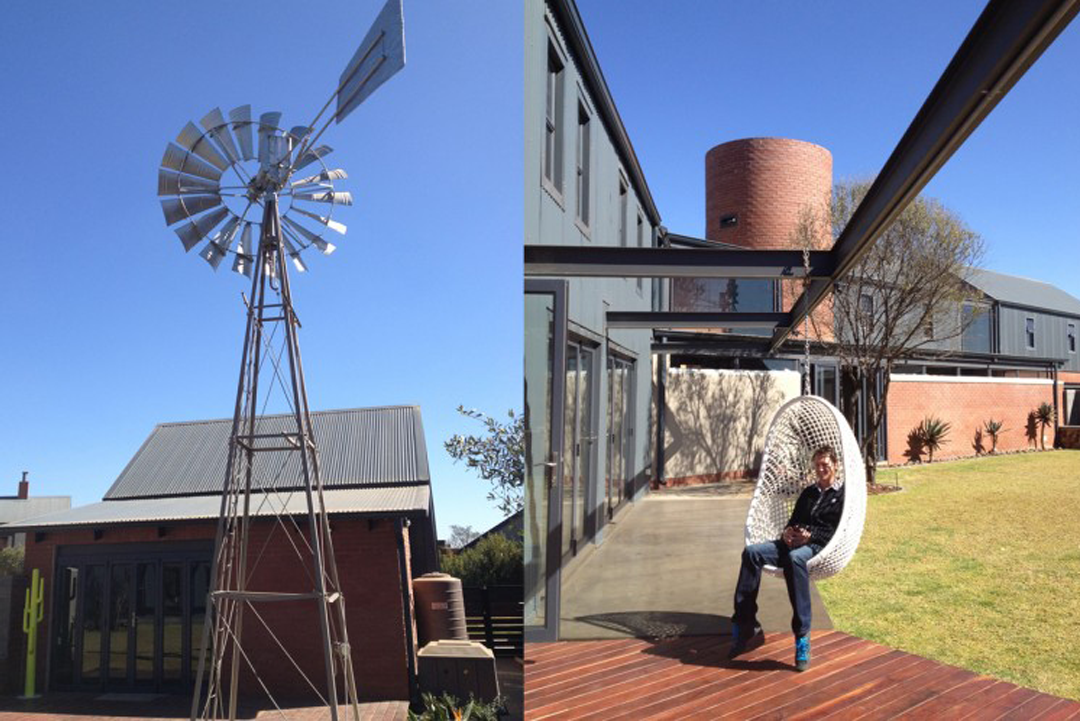 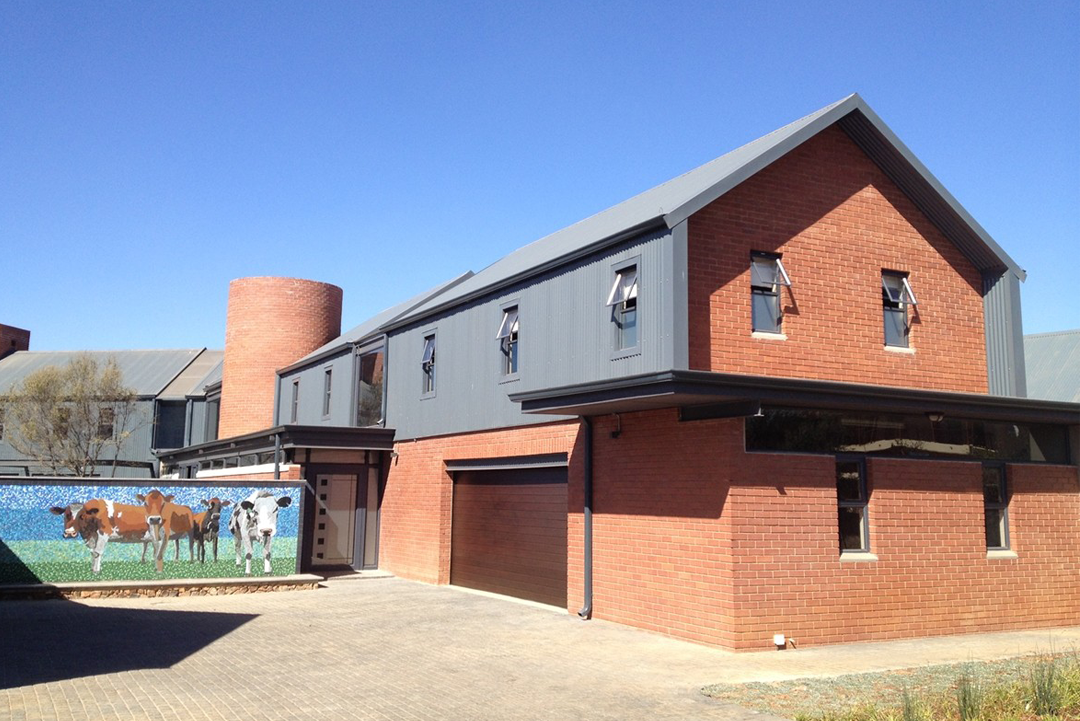 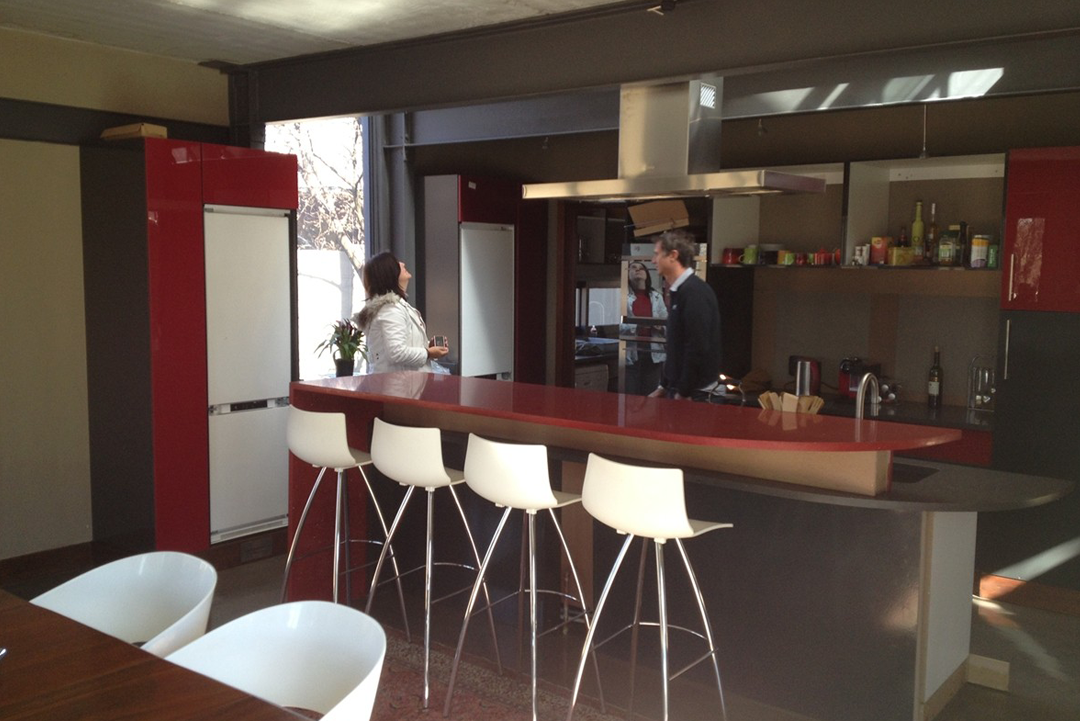 Southdowns Estate, previously part of the Irene Dairy Farm, borders the oldest golf course in Pretoria & the working farm to the North, separated only by a strong flowing stream which occasionally floods its banks during the feverishly hot sometimes humid Highveld summers. Set in this tranquil estate where people can still walk their dogs and children ride their bicycles, in a contemporary farm style house, on the edge of a pasture where dairy cows graze occasionally.

Two sets of double garages, which faces each other rather than the street, frames a planted courtyard, together with a hedge & water feature along one side of it, to cool down the visitor before entering the frameless glass front door. A long passage, which doubles as a gallery and is lit naturally by a celestial strip window along the one side, leads one to the semi-private living areas bordering the pasture at the back end of the stand. A brick ‘silo’ features a spiral staircase which leads one to the more private bedroom areas, and act as a point of ‘tension’ where the house kinks towards the living areas and kitchen. The owner’s private study look-out is perched at the top of the ‘silo’, and affords 360 degree views of the farm-like surroundings.

The main bedroom suite walks out on a large balcony overlooking the pastures on the one side and the pool and garden on the other. The lap pool doubles as passive cooling device during the dry-hot Highveld summers, and sports an integrated ‘jacuzzi’ at the one end of it. The pool, together with the house, frames a private ‘courtyard’ garden on the northern side of the house, out of view from the street. A ‘windpomp’, doubles as a focal point between the pool and pool house, and utilizes the light breezes to feed the water feature without the need for electricity, as only one of many ‘green’ or ‘sustainable’ features of this unique dwelling.

This is the ideal farm-house-in-the-city to come to in the evenings after a hard day at work, and sit on the veranda and slowly sip on your favorite drink, enjoying the bird life and other animals in the pastures, while the kids are playing to their hearts content in the garden.