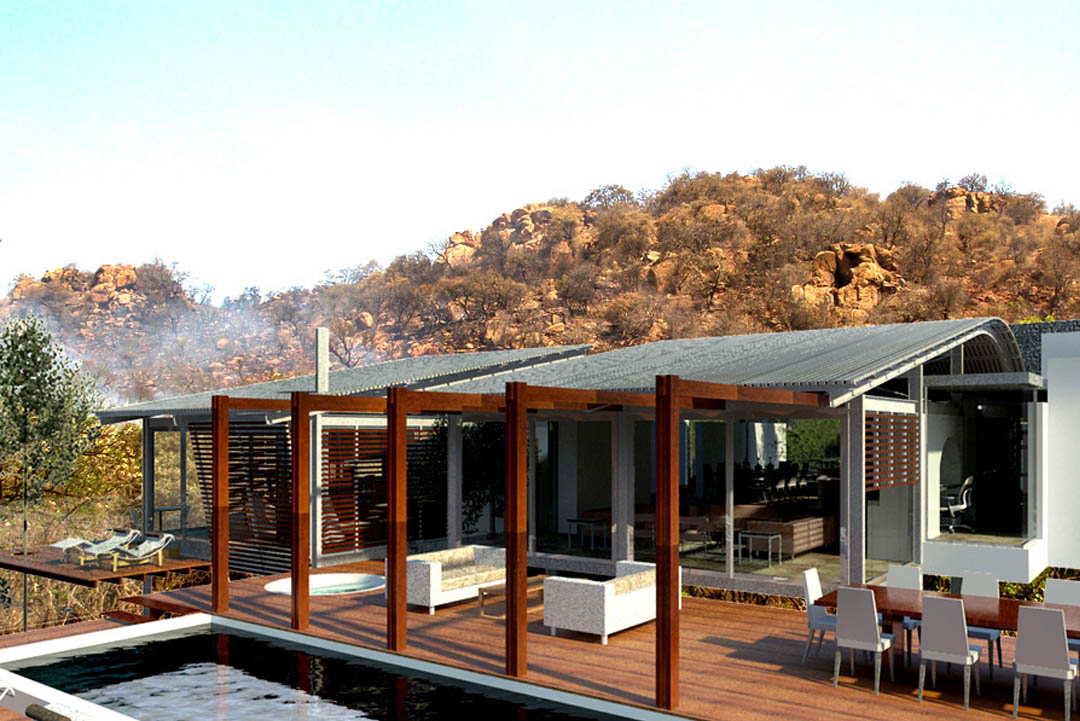 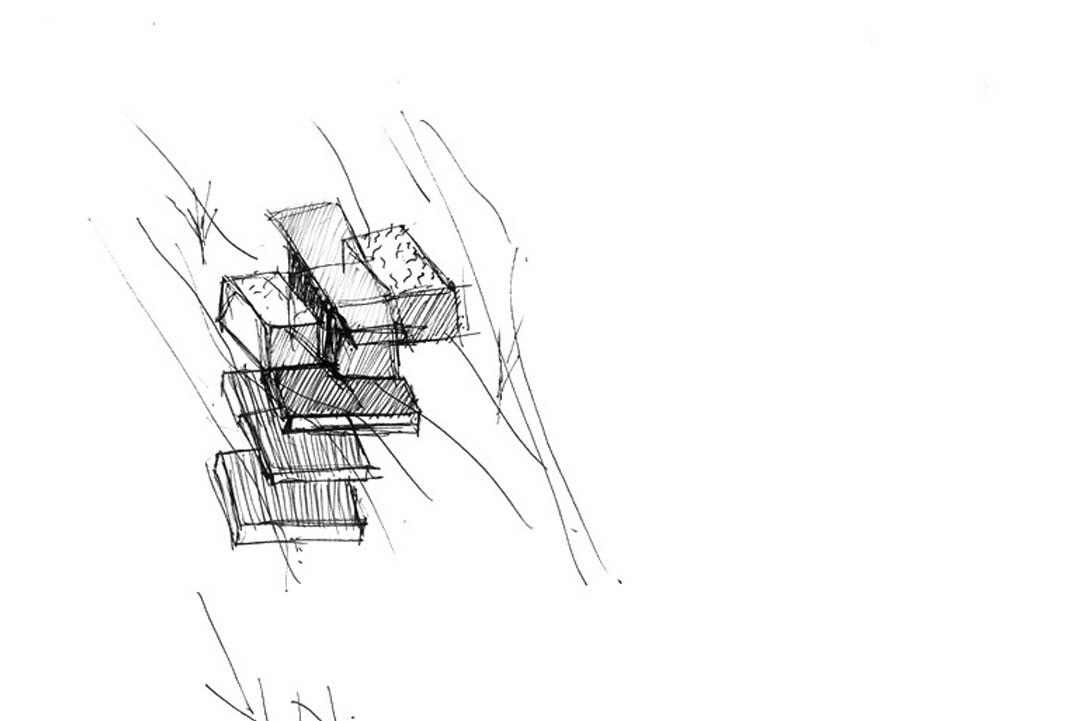 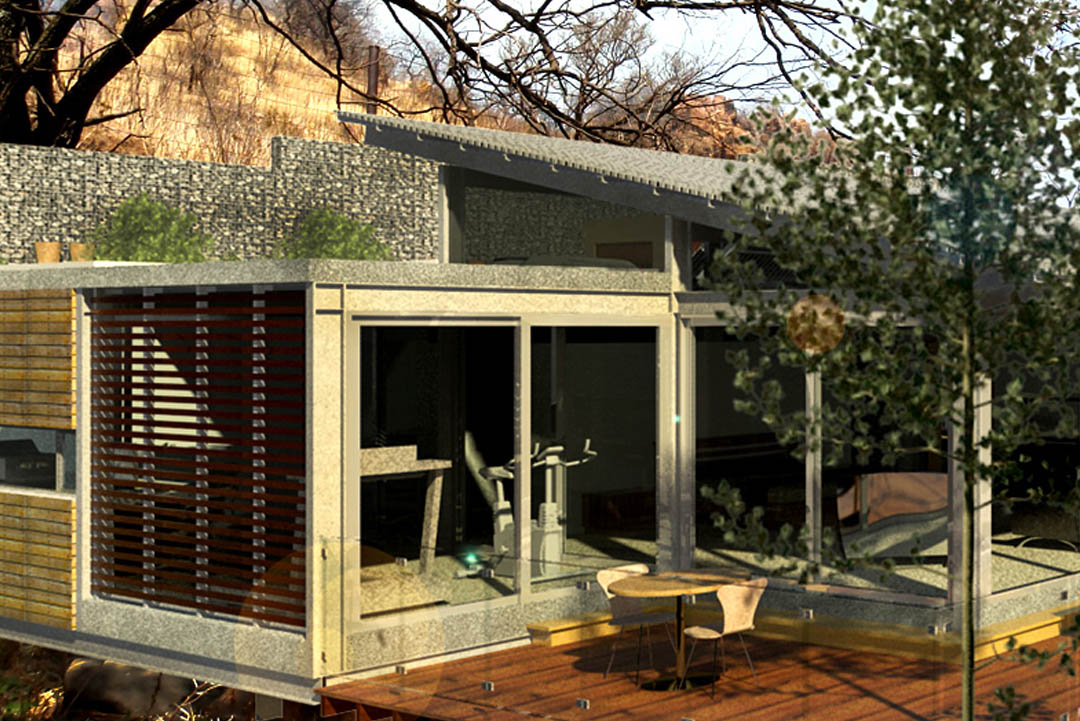 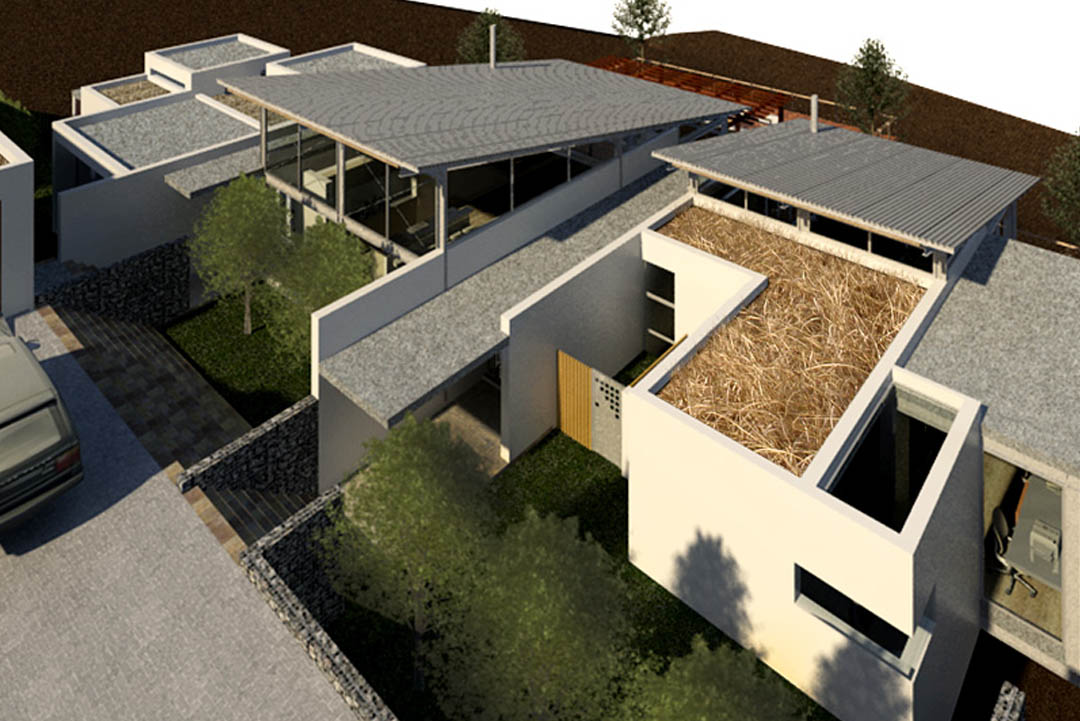 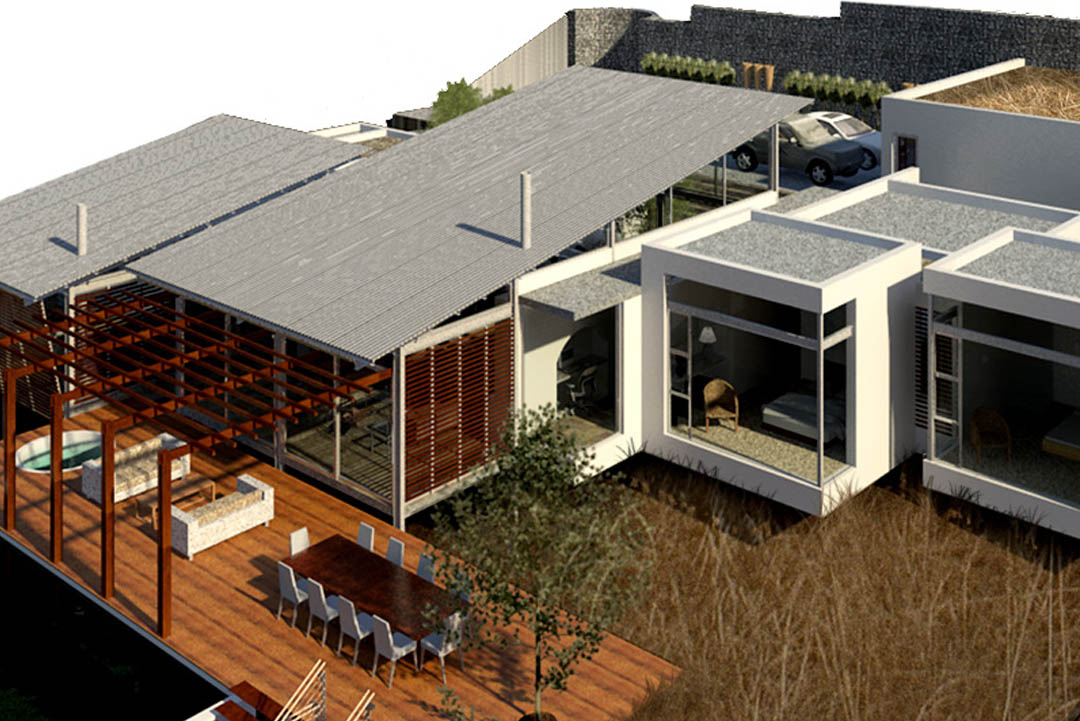 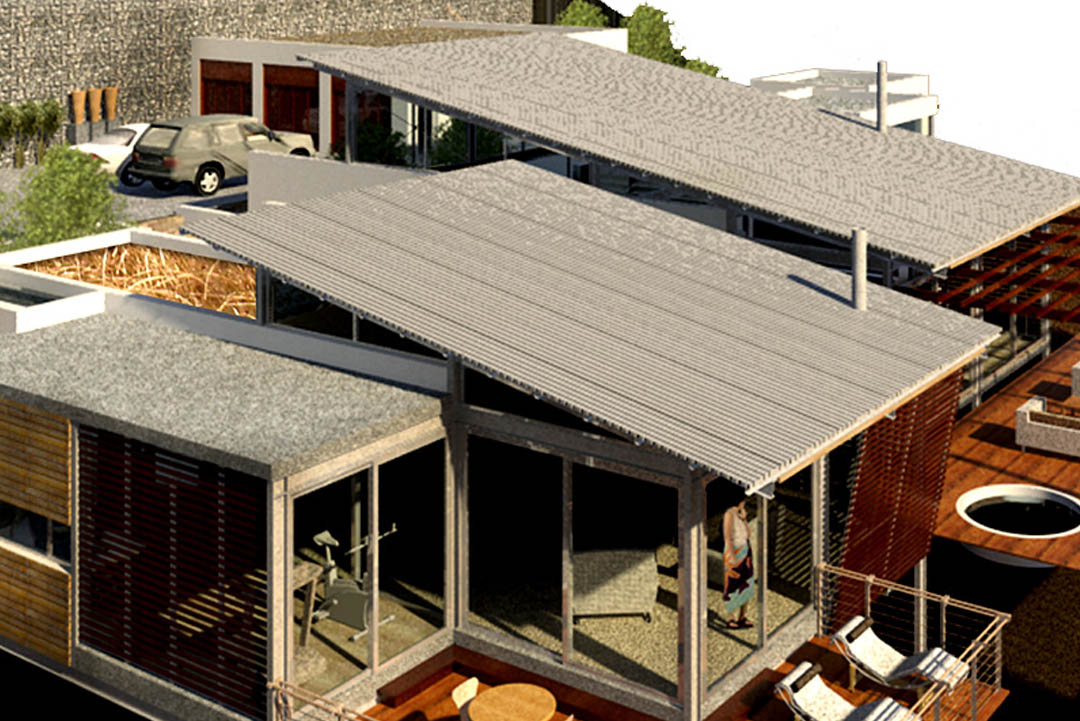 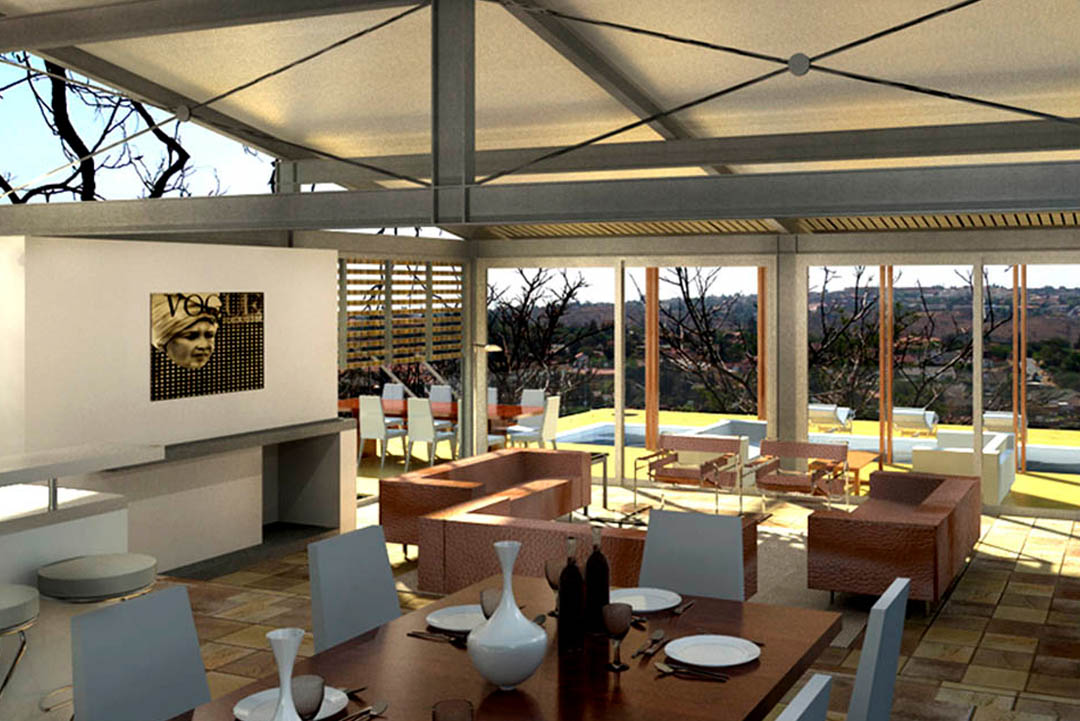 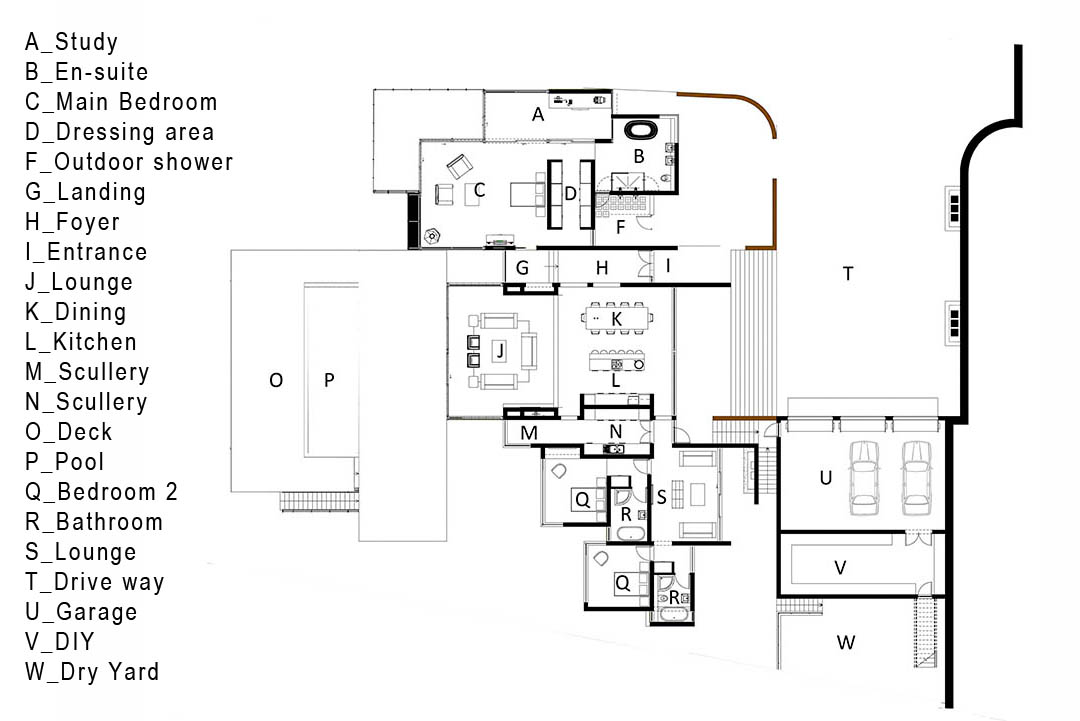 The amazing site allows the house design to optimize adjacency to a Nature Reserve on a “koppie” optimizing the views to the north. It is a modern and open house but with the use of some natural materials to let the house blend in with the nature, true to its surroundings.
The house offers a boutique hotel feel, a place to escape, to get away from the busy life in Johannesburg.  A very steep site allowed the use of “alternative” building methods to keep cost in line. Various garden “rooms” and private spaces with an open feeling offers you a  glimpse between inside & outside all the time in this house.

The street boundary wall, matching gate & spiraling pathway up a steep slope, do not prepare you fully for what awaits around the last bend. The house is in essence a pavilion, positioned halfway up the site, with a slanted roof to follow the contours, opening up views of the indigenous vegetation of nature reserve up the koppie to the south, and allowing copious amounts of light to spill through to the deeper recesses of the interior.

The spiraling driveway leads one around the house to open up in to a tranquil garden, complete with a bamboo ‘forest’ in a water feature, set off against a gabion retaining wall to keep the koppie at bay. Grass blocks allow storm water to filter through, and hydrate small indigenous plants between them, resulting in a green soft approach of the front door. Stairs, the width of the living areas, doubles as a pavilion in the ‘back garden’, while framing an outdoor lounge area to the south of the open living area.

When entering through the front door, one is presented with northern views of the southern suburbs of Jo’burg, resulting in a nearly fairy-like scene of stars and the lights of the city towards the north. The open plan living areas spill over into an indoor-outdoor deck area around the lap pool. The pool doubles as a passive cooling device during the very dry and hot Highveld summers, as a light North-Easterly summer breeze blows the cool evaporated air through the living areas and bedrooms. The deck doubles as shaded parking below for guests.

The living area separates the private main suite to the east and the two guest suites to the west. The main suite sports a small study nook, a gym area and a ‘private’ courtyard off the bathroom, and its own deck area on the northern pool-side. The guest suites have their own lounge, and leads out to their private courtyard garden tucked between the house and the three garages, which doubles as a large workshop for the owner. A garden on the rooftop of the garages, crowns this house as it’s affords a raised perch to sip sundowners while enjoying the views.